The main varieties of quartz that fully crystallize as individual crystals or groups of crystals are known as Amethyst, Citrine, Smokey Quartz, Rose Quartz and Rock Crystal Quartz depending on their color. Amethyst is the purple variety of Quartz (crystalline silicon dioxide). Amethyst crystallizes in the trigonal system and is found in open cavities known as Vugs. Amethyst has a hardness of 7 which makes it a durable stone – Suitable for rings and other jewelry items that take a lot of abuse.

Amethyst is a wonderful grounding stone. It has been known to assist with balancing the spiritual and physical planes and bringing calmness to one’s life. Amethyst is very well known as an addiction stone as it helps aid one in stopping addictive behaviors. The main varieties of quartz that fully crystallize as individual crystals or groups of crystals are known as Amethyst, Citrine, Smokey Quartz, Rose Quartz and Rock Crystal Quartz depending on their color. Citrine is the Yellow variety of Quartz (crystalline silicon dioxide). Citrine crystallizes in the trigonal system and is found in open cavities known as Vugs. Citrine has a hardness of 7 which makes it a durable stone – Suitable for rings and other jewelry that takes a lot of abuse. The color can vary from light yellow to a dark brownish yellow. Sometimes miscalled Madera Topaz it is sometimes described as possessing a golden color.

Citrine is described as a positive energy stone believed to aid in the accumulation of wealth and success in business. As an excellent grounding stone it helps smooth out problems with family, emotions, and relationships. Garnet is group of minerals all crystallizing in the cubic system. The most common form of garnet is iron-aluminum silicate (almandite), however magnesium, calcium, and chromium can be found in other varieties of garnet. The garnets intermix in chemical composition and are found in a host of colors including black (andradite), green(tsavorite and demantoid), orange to brown (spessartite), yellow, and orangish red to red to purple (pyrope, rhodolite).

Used since antiquity as a healing stone, Garnet promotes personal freedom of expression and vitality. This stone is great for one’s general well-being and creativity. Iolite has an inky blue color and is often confused with Sapphire and Tanzanite. As a grounding stone in relation to male/female characteristics Iolite creates balance. You can also use Iolite as a cleansing stone.

Enjoy this stone and enjoy life to it's fullest potential.... 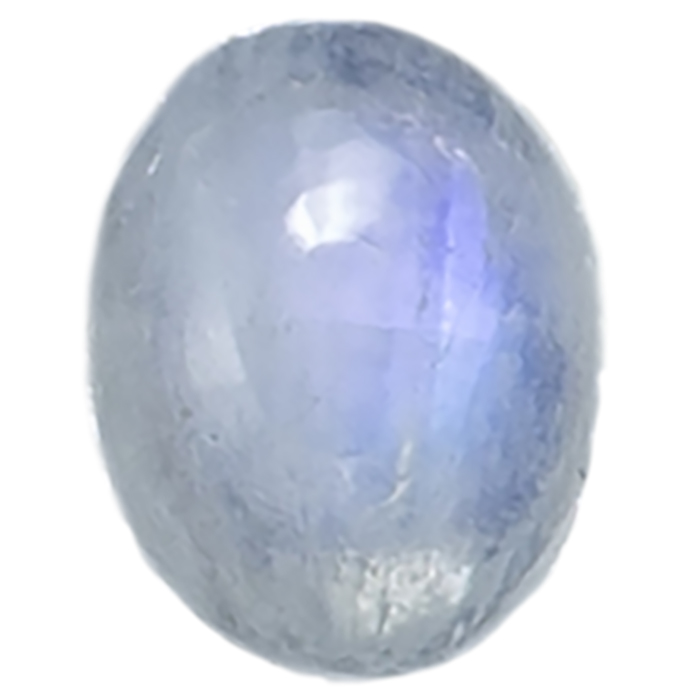 Moonstone is a member of the Feldspar family displaying the optical phenomenon of Adularescence (the blue shiller). Moonstone is an Orthoclase Feldspar containing layers of Albite which cause the blue billowy light and/or the colorful display of colors in Rainbow Moonstone. This gemstone has a hardness of 6 and is an Aluminum Silicate which may contain varying amounts of Albite, Potassium and or Barium depending on the makeup of the mineral group. Moonstone is known to bring good fortune and luck, and assists us with inspiration and awareness in matters of business and love. As a good all-around healing and protective stone it is a favorite to wear and especially powerful during the full moon. Quartz is silicon dioxide and crystallizes in the trigonal (rhombohedral) system. Crystals form in hexagonal form with distinct terminations common.

A variety of distortions are seen with quartz crystals, hence various names have been associated with different crystal structures. Striations on the crystal run in the direction of the width. Twinning of crystals is not uncommon and crystals have been determined to have a right or left handed nature. This is called enantiomorphism .

Quartz is known to exhibit piezoelectricity, a phenomenon wherein electricity is created when pressure is applied to the crystal. It is this unique characteristic that enables quartz to be used in electronic equipment such as broadcasting transmitters, radios and clocks.

Quartz is found in several forms. The varieties that crystallize are known as Amethyst, Citrine, Smokey Quartz, Rose Quartz and Rock Crystal Quartz depending on their color. Quartzite is composed of inter-connected granular quartz crystals and comprises aventurine and other ornamental quartzites. Chalcedonies are cryptocrystalline or microcrystalline quartz composed of microscopic crystals of quartz and comprises agates, onyx and jaspers.

Agates have a fibrous structure, while jaspers and onyx have a granular structure. Agates are the banded varieties of chalcedony, usually transparent to translucent while jaspers are usually opaque and are generally owe their rich colors to iron and other impurities. Onyx and sardonyx is generally banded, but in simple straighter patterns than agates.

Quartz allows the energy to freely flow through our mind and body. Clarity and focus are enhanced while wearing a Quartz Crystal and the natural healing abilities of the body are revitalized. Quartz is fantastic at helping one call upon their memories and clarify their emotions. The crystal will absorb any intentions you have while it is in your hands and will help support you at all things related to your life. Quartz is a very positive stone. It is a great crystal that is used for all spiritual purposes. Ruby is the Red version of the mineral corundum.... Ruby occurs in Orangish-Red to Purplish-Red color and has been praised and cherished since antiquity. Gemologists identify pink corundum as Pink Sapphire, however the energy is aligned with Ruby.

As a wealth stone, Ruby encourages a life light that encourages love and emotional well-being. Protection comes to one that possesses a Ruby and keeps the stone close. The stone is very useful in matters of blood flow and stimulates the Heart Chakra. Silver is a beautiful reflective metal...not to be confused with Pewter or the lately coined new silver names which lack the beauty and qualities of Silver. There is nothing like the Real Thing. It is estimated that more than 95% of all the silver ever mined throughout history has already been consumed by industrial use. That silver is gone forever, unrecoverable at any price. In 1900, there were approximately 12 billion ounces of silver in the world. Today, according to The Silver Institute's ''World Silver Survey 2013,'' identifiable silver bullion stocks worldwide (not including bullion held in depositories on which information is not available, or in private investor vaults) totaled just 1.366 billion ounces at the end of 2012.

In addition to its industrial uses and qualities, silver is also used in numerous health care products because of the unique antibacterial characteristics that it possesses. The "Silver Bullet" is used by hospitals to prevent bacterial infections in burn victims. Wound dressings and other wound care products incorporate a layer of fabric containing silver for prevention of secondary infections. In a world that is showing increasing concern about the spreading of disease and potential pandemics, silver is increasingly being tapped for its microbicidal qualities.

Silver is known to be a highly conductive metal and provides balance so the gemstones used with the metal can exhibit their qualities with the utmost intensity. Silver has been stated as a mirror to the soul and can enhance one’s ability to deal with negativity and concentrate on the positive aspects surrounding us. Sterling Silver is 92.5% pure Silver with 7.5% Copper added to give strength and durability to the jewelry. 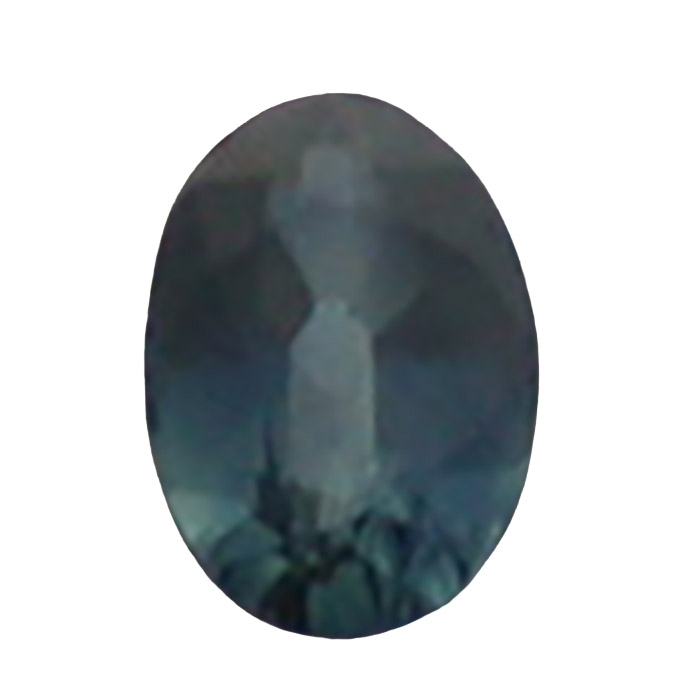 Sapphire is Corundum (Aluminum Oxide Al2O3) occurring in any color other than Red (which is considered Ruby). Sapphires range in color from Colorless to just about any combination of colors. We sell Blue Sapphires in our handmade jewelry from Thailand. Thailand has been an important traditional source for Sapphires, although there are many localities throughout the world including Sri Lanka, Miramar, and even Montana in the USA that they are found. The stone has been associated with royalty and is very durable, surpassed only by diamonds for hardness (9 on the Mohs Hardness Scale). Sapphires crystalize in the trigonal system with many variations in crystal form.

Sapphire is known as a protective stone and capable to influence spirits and matters of the soul.  Sapphires contribute to a person's clarity and understanding of spiritual realms. The Sapphire is symbolic of one's Devotion to God and a symbol of Heaven.  The stone is known to improve Loyalty, Fidelity, Communication, Depression, Anxiety and Insomnia as well as a host of infirmities including Blood diseases.  Sapphires are the birthstone for September and  is mainly associated with the 3rd eye Chakra, but can have a positive effect on all the Chakras. 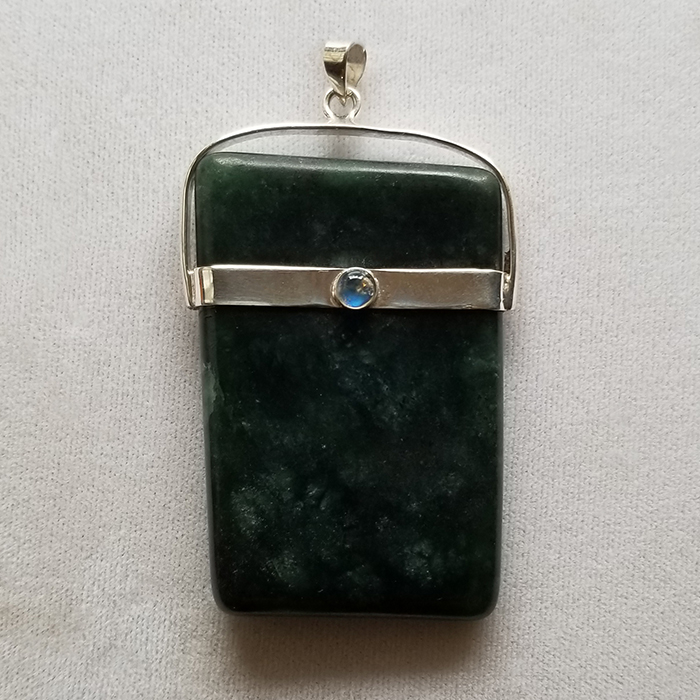 Jade has been used since ancient times by many different civilizations and has been heavily recorded in Chinese history. It has been used in everything from everyday objects to ceremonial items. Often used for ornamental purposes, it can be found on jewelry, grave furnishings and everything in between. It is extremely well known for protection, wisdom and harmony. Jade comes in many different colors, and although it is mostly thought of as green it can also be purple, white, red, orange, black, yellow, brown, and blue. Believed to bring good luck, Jade can help one attract positivity to one’s life. Wear Jade to protect oneself from manipulation, abuse and controlling behavior. 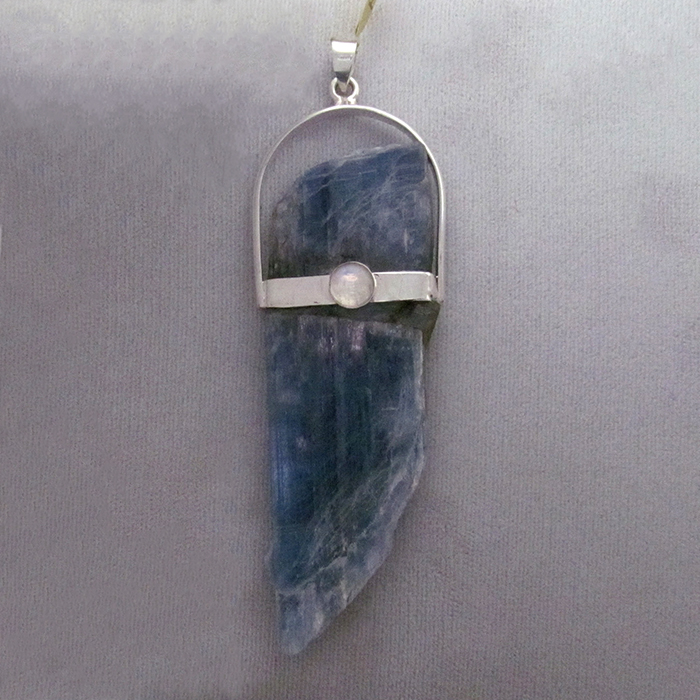 Kyanite is most well known for being blue but comes in a variety of many different colors with each color having its own specific metaphysical properties. It is the only other type of crystal besides Citrine that does not need to be cleansed and it can be used to clear other crystals. Some of the properties found in every color includes: creating a calm state of mind when one has negative feelings, helping one think in a more rational and logical manner, aiding in recalling dreams and helping one achieve development psychically and spiritually. Using raw Kyanite maximizes its soothing quality. 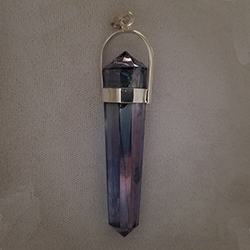 Tanza Aura, also known as Tanzan Aura or Tanzine Aura, is a type of Quartz created using a very similar process to the Aqua Aura Quartz. This specific type of process differs from the Aqua Aura in that it uses other metals such as Niobium and Indium as well as Gold, to create the reddish/purple/blue hues that radiate throughout a piece of Tanza Aura Quartz.

Like Aqua Aura, Tanza Aura also helps with enhancing and stimulating psychic skills. It is a wonderful tool to help aid in many different metaphysical categories, such as spiritual readings and connecting with spirit guides. Tanza Aura works extraordinarily well when trying to communicate with otherworldly beings.

Turquoise is known as a Protection Stone.  Turquoise is a hydrated phosphate of Copper and Aluminum.

Color can range from Yellowish Green to Blue.